The bookshop La Grande Ourse, partner of the festival, will be present at Dieppe Scène Nationale on Saturday 23 October to present the books of the different speakers.

The microsillons collective will present its research on the critical pedagogue Paulo Freire (1921-1997) and the forms of artistic and pedagogical re-engagement that have emerged from it. This presentation will be followed by a sequence in which everyone will be invited to reflect on the subjects, tools or tactics that we should urgently educate ourselves to re-imagine the world in common. To do this, a bundle, whose shape is inspired by the blob – a single-cell organism capable of learning and transmitting its learning – will serve as a generating tool. This object is a patchwork of proposals, voices, languages and positions on contemporary educational issues. 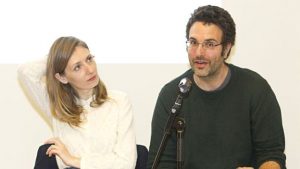 Created in 2005 in Geneva by Marianne Guarino-Huet and Olivier Desvoignes, the collective microsillons develops collaborative artistic projects engaged in a social and civic debate, based on strategies derived from critical and feminist pedagogies.
The collective has collaborated with numerous cultural institutions including the Garage (Moscow), 116 – center d’art contemporain (Montreuil), VANSA (Johannesburg), the WYSPA Institute (Gdansk), the Centre d’art contemporain du Parc St-Léger or Le Centre d’art contemporain Genève, where it was in charge of mediation projects between 2008 and 2010. Since 2015, microsillons is responsible for the Master TRANS- Socially engaged artistic practices, at HEAD – Geneva. microsillons has participated in several research supported by the Swiss National Fund for Scientific Research and published in 2019 “Motifs incertains – Enseigner et apprendre les pratiques artistiques socialement engagées” (Presses du réel). The collective is the recipient of a mediator grant from the City of Geneva (2007) and a Swiss Art Award (2008) (finalists in the cancelled 2020 edition). Marianne Guarino-Huet and Olivier Desvoignes hold PhDs from the University of the Arts London. 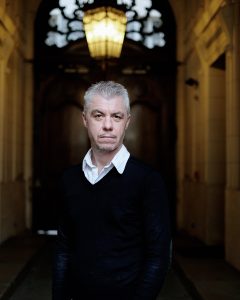 Composed of a series of juxtaposed propositions, which unfold, increase and unfold, this unpublished text* wages a “war after the wars”: it wants to say the urgency to live, to desire, to understand, to tolerate, to say and to support in front of the others – before it is too late. A force of interpellation that weaves a certain form of community in an everyman’s world.
Through this collective reading, each spectator is invited to read, to create a multitude of voices. For this poetic atlas of solidarity seeks an exploration of links – a polyphony of crowds, a choir in motion – in a perspective open to the future.
*Text conducted in 2021 within the framework of the “Writers’ residency programme of the Île-de-France Region”.


Frank Smith
is a writer and video artist. He is represented by the Galerie Analix Forever (Geneva). He is the creator of the Bureau d’Investigations Poétiques from which he explores the junctions between Poetry, Politics and Image – through books, films, installations, exhibitions and performances. Thus are delivered “protocols of experimentation that question the possibility, the efficiency, the performativity of literature and film.” (V. Bergen, art press). Frank Smith has published about twenty books to date and has been developing a forensic poetics since the publication of GUANTANAMO (Seuil, 2010, and Les Figues Press, Praise by Avital Ronell, Los Angeles, 2014) – crowned best book of the year by The Huffington Post. In the wake of these publications, he makes films and video installations in which the non-relation between Seeing and Speaking is put into practice and from which the arcanes of a new “poetry cinema” are laid. All his films have been presented at the Centre Georges-Pompidou in Paris. Next film: THE FILM OF THE IN-BETWEEN, dedicated to the border between the two Koreas. Next book to be published: IRAK 24 HOURS, Créaphis editions, in homage to Julian Assange.

How to bring non-humans into politics? In the face of climate catastrophe, how can we fork our existing infrastructures? Should humanity be prepared to “close down” what is destroying it, according to the proposals made by the economist Diego Landivar*, among others? Can capitalism help us do this? 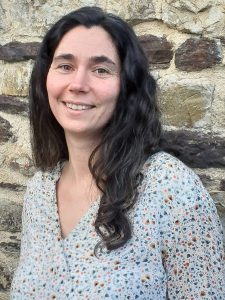 Léna Balaud holds a degree in agricultural engineering. She is now a farmer and independent researcher in political philosophy. She is a member of the editorial board of the online journal Terrestres. With Antoine Chopot, she published Nous ne sommes pas seuls. Politique des soulèvements terrestres, published by Editions du Seuil, Anthropocene collection (2020). What happens to “politics” when women farmers and environmentalists disseminate herbicide-resistant seeds in GMO monocultures to sabotage yields? Other ways of doing things, of defending ourselves, of resisting, are ahead of us, destabilizing us and strengthening us: animal, plant, forest, microbial, fungal ways… Our allies are multiform, considerably more numerous and diverse than our imagination allows. This treatise of terrestrial political ecology opens new horizons to act with nature against those who collapse it. 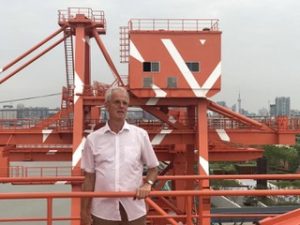 Yann Moulier-Boutang is a French economist and philosopher. In 1968, he participated in the March 22 movement and then in the Cahiers de Mai. From 1970 to 1975, he was a student at the École normale supérieure. He joined the operaist theses in 1970 and in 1972 participated in the creation of the journal Matériaux pour l’intervention. In 1973, he met Toni Negri, who would have a lasting influence on his work and to whom he would be very close in the years 1980-2007. Since 2000, he has been the director of the journal Multitudes, where he regularly publishes articles of substance or reaction to current events, on his favorite subjects such as a total overhaul of our taxation system via a pollen tax on flows, or the political stakes of the digital age. After teaching at the École normale supérieure and the Institut d’études politiques de Paris, he is a professor of economics at the Université de technologie de Compiègne. He was International Adjunct Professor at the Fernand-Braudel Center of the State University of New York at Binghamton (USA). An advocate of unconditional basic income, he justifies it in his book L’Abeille et l’Économiste (2010) by the fact that all humans create economic value, like bees during pollination. According to him, the basic income is not a redistributive system but a “reward for the pollination” of each citizen. His publications include Le Capitalisme cognitif : la nouvelle grande transformation, ed. Amsterdam, 2007 and Yann Moulier-Boutang, De l’esclavage au salariat : économie historique du salariat bridé, Paris, Presses universitaires de France, 1998. Althusser : une biographie (1re partie), Grasset, 1992 (reprinted in pocket in 2002). 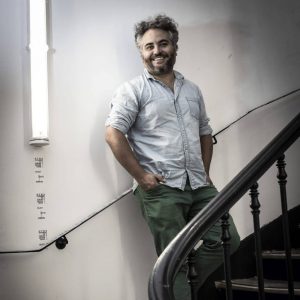 Diego Landivar is a Doctor of Economics and a former student of the Ecole Normale Supérieure. His work focuses on ontological reconfigurations, in the context of the Anthropocene, from an anthropological perspective. These questions have led him to investigate cosmopolitical reconfigurations in Andean countries, the rights of entities of nature and non-humans, Indianism, the status of technical objects, controversies around the ecological transition, the ecological redirection of organizations, territorial ontologies, and the decolonization of Mars.  He is co-founder and director of the Origens Medialab.  He advises various territories and public authorities in search of identity singularity and ecological alternatives. He is also co-founder of the PEOPLE Program. Latest publication: (with Alexandre Monnin, Emmanuel Bonnet), Héritage et fermeture, pour une écologie du démantèlement (éditions Divergence, 2021) 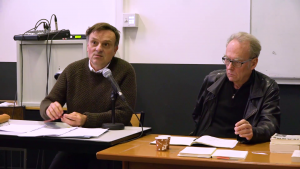 18h-20h Utopias at the Auction House

In the Dieppe fish auction, where seafood is sold directly from the producer to the fishmonger, and at the invitation of Eric Lecerf and Bertrand Ogilvie, five speakers will discuss utopias today. Utopia is not only a literary and philosophical genre situated in history. It is a trend of thought that allows us to think about existence differently, independently of any belief in the power of discourses on society and its history. It is a free field of experience which, in the diversity of hopes to which it gives substance, opens up a space for the unprecedented, for encounters, without which living would be nothing more than a dull survival under conditions. To debate it is to be part of an otherness which, from the tribunes of the past to the screens of the present, implies an open community.
Éric Lecerf is a lecturer in philosophy at the University of Paris 8 since 2002. He is a specialist in the philosophy of work and theories of emancipation and also teaches in the film department. Before joining the university, Éric Lecerf worked for four years (1976-1981) as a specialized worker in the telephone industry, then was a teacher for 18 years. During this period, he was also a research associate at the CESP-EHESS under the direction of Paul-Henry Chombart de Lauwe (1986-1989) and at the Collège International de philosophie (1992-1998).
Born in 1952, Bertrand Ogilvie has taught philosophy since 1978, at the École normale de Cergy Pontoise, at the University of Nanterre and finally at the University of Paris 8 Vincennes Saint-Denis from 2012 to 2021. A psychoanalyst, he has also worked with children in Arno Stern’s painting workshops and participated in the rediscovery of Fernand Deligny’s work, at the frontier of education, psychiatry and politics. Very involved in theatrical adventures and jazz, a great contemplative paradoxically more interested in meetings, collectives and friendship than in solitary work, he has written books and articles on music, work, psychoanalysis, education, politics and theater, all of which have in common that they seek to identify contemporary forms of extreme violence and ways of confronting it. He has published, among others: Lacan. La formation du concept de sujet (PUF), L’Homme jetable (Éditions Amsterdam), La seconde nature du Politique (Éditions de l’Harmattan), Le travail à mort. La vie quotidienne au temps du capitalisme absolu, published by Éditions de L’Arachnéen and La Légende dorée de l’école émancipée published by Éditions du Retrait.
Eric Lecerf & Bertrand Ogilvie will invite during this session, in distanciel, Alexander Neumann (sociologist, University of Paris VIII), Silvana Rabinovich (philosopher, National Autonomous University of Mexico), Frédéric Rambeau (philosopher, University of Paris VIII).
This meeting, Utopias at the Auction House, is initiated by the philosophy department of the University of Paris 8 – Vincennes – Saint Denis and its laboratory, to which the five speakers belong. The meeting will take place at the University of Paris 8 – Vincennes – Saint Denis in Dieppe, an institution which, since its creation in the immediate aftermath of May 68, has never ceased to defend this utopian faculty against dogmatic trends and denials.

8:30-10pm at D.S.N, Great Hall
Conference and meeting with Romain Bertrand: : “From two worlds one: Indonesia and the Parmentier brothers

“Saturday 3rd April 1529. The Sacre and the Pensée, two large vessels, leave the harbour of Dieppe under the command of Jean and Raoul Parmentier, “poet captains” whose devotional songs exalt the purity of the Virgin and the endurance of the sailors. Chartered by Jean Ango, whose family had made its fortune by decimating herring banks and Spanish fleets, the expedition aimed to reach the Spice Islands of the Indonesian archipelago and to acquire black pepper under the nose of the Portuguese, who were already partly – but only partly – masters of the place. Eight months later, at the beginning of December, the two captains were killed off the coast of Sumatra. In the meantime, we are told, the Europe of the Renaissance, all culture and science, had talked to Asia, its sultans and its ulama, and imposed its will on them. Did it really? ”

Romain Bertrand is an historian. Director of research at the Center for International Studies and Research (CERI, Sciences Po-CNRS), he is a member of the editorial board of “Annales. Histoire, sciences sociales” and teaches at Sciences Po Paris. He is a specialist in the history of the first contacts between Europe and Southeast Asia, as well as the colonization processes in this region (Indonesia, Philippines). Récits d’une rencontre Orient-Occident (XVIe-XVIIe siècles)” (Seuil, 2011), “Le long remords de la Conquête” (Seuil, 2015), “Qui a fait le tour de quoi? L’affaire Magellan” (Verdier, 2020) and “Le Détail du monde. L’art perdu de la description de la nature” (Seuil, 2019). He also edited the collective volume “L’exploration du monde. Une autre histoire des Grandes découvertes” (Seuil, 2019). He is currently working on a critical edition of the travel report of the Parmentier brothers to Sumatra in 1529.